A glitch is an error in a game, caused by exploiting an action never intended by the creator or by manipulating the game code.

Here is a list of some of the in-game bugs, there are more at the Coloraze Bugs and Glitches forum thread.

These can be performed on any level, assuming it fits a necessary criteria.

If the wheel is the same colour as a certain colour lock, with a differently colured portal on top, then goes out of view of the portal and locks and changes colour, if the player still does not visit the blocks and enters the portal, the solid color lock underneath will be passed through. See this level for a demonstration.

A somewhat interesting glitch that can be activated very simply. It spawns multiple wheels in one spot, which has bizarre side effects.

How to start[edit | edit source]

Where the game locks up completely. These can be obtained by the interaction with certain Void glitch blocks.

These can both be seen on this level

Achieved with Level Editor glitch blocks, placing a wheel on a finish line may cause the time and collectible counter to jump to a different area on the screen, even if there are no collectibles in the map. The counter will also say 999/999. You can see it on this level.

There is another version that appears to happen when hitting P at the same time a level restarts:

The glitch happening in the standalone

In the editor
Add a photo to this gallery

Put a key after a checkpoint so you get the key after activating the checkpoint. Collect the key then press C. You will have a key plus the key will still be there. As it was generated by a glitch, it has special properties; it may be used up as another colour for that colour's lock, retaining the real key of that colour. Obviously they can be used on their own kind.

Trapped in a block[edit | edit source]

If a moving platform moves into a checkpoint, and the player returns to it, the player will be unable to move and will be forced to restart. This also happens with portals.

These can only be performed in the level editor; however the effects may carry on in posted levels.

If you press Esc at the right time when you die, the level editor music is heard when playing the level. Attempting to trigger this may also cause a version of the Hud Bug

Watch video for demonstration. The player must drag blocks out of the map edge, then hold Z and press some arrow keys. 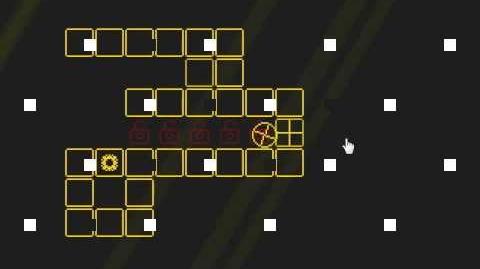 Attempts to recreate these glitches have been unsuccessful, or are rare or are limited to certain levels.

Sometimes gravity blocks can disagree with each other. This results in two or more gravity switchers pointing in opposite directions

There is a glitch that causes the wheel to not burst when falling into the Void. This seems to happen when blocks like moving platforms and portals are outside of the map.

Retrieved from "https://coloraze-uk.fandom.com/wiki/Glitches?oldid=4961"
Community content is available under CC-BY-SA unless otherwise noted.